Shallots (Allium ascalonicum) belong to the plant family Alliaceae which includes other plants such as garlic and onions, leek and scallion. Shallots grow in clusters with the separate bulbs, which are attached at the base, being much smaller than onions, usually up to the size of a golf ball. Once peeled of the outer papery skin, each shallot divides into cloves in much the same way as garlic. Small shallots will have two or three individual cloves whilst larger ones can have up to six. Culinary wise, they have a finer texture and a milder taste than most onions. 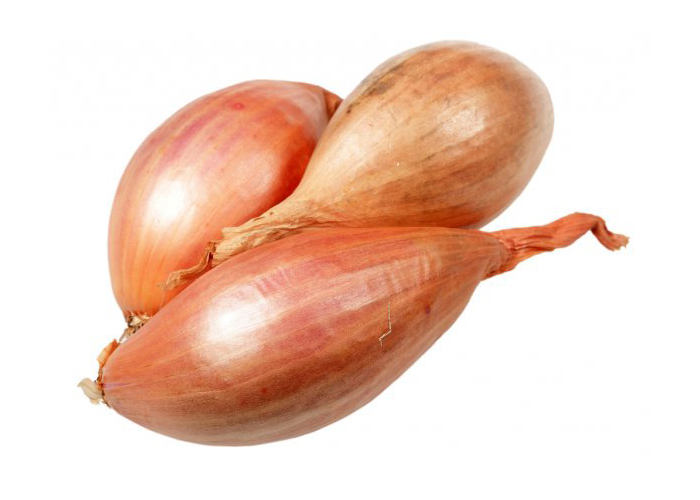 There seems to be some confusion about name for shallots, in particular Green Onions, Scallions, Bunching Onions and Spring Onions. Shallots are none of the aforementioned, although in some countries they interchange the names willy nilly – adding to the confusion.

Types, origin and history of shallots

Shallots can be divided into two different types: French Grey or Griselle genus Allium oschaninii which are considered by many to be the true shallot and Allium ascalonicum. Grey shallots have a long bulb, sometimes resembling frogs legs, are covered with grey skin and have a white/purplish flesh whilst Allium ascalonicum are generally rounder in shape with a copper/russet or purple coloured skin.

The botanical name ascalonicum is taken from Ascalon, which was a town in Palestine, where they were thought to have originated, however it is now believed that they probably came from Asia. Certainly c300 BC the Greek writer Theophrastus referred to them in writings as did Pliny in the 1st century AD. They were first introduced to Western European during the 12th Century AD when Crusaders brought them home from Palestinian.

Although shallots are perennials they are best treated as annuals. Because they are hardy they are excellent for growing in colder climates and they also cope much better with heat and poorer soils than ordinary onions. Whilst hey can be grown from seed, better results are usually achieved using small offset bulbs (sets), which are planted in late autumn for over-wintering. During the growing period this “mother” bulb will multiply into a cluster of several bulbs. When planting, the tips of the bulbs should remain a little above ground. Plant the bulbs root down, 15cm/6-inches apart. Do not plant in ground which has recently had manure added to it.

They generally reach maturity around July or August, and only require minimal watering and weeding throughout the growing season plus a feed of general fertiliser in early spring. Like onions, they are harvested when the leaves begin to turn brown and wilt.

To harvest, pull up the clusters, remove any soil or excess dry skin, and leave in a warm, shady, well ventilated place out of direct sun for about a week to cure.

You can save some of the whole bulbs for the following year, but only choose the best quality bulbs from the highest yielding clumps ensuring you pick specimens which are free from disease. When planting, plant the whole bulb rather than dividing it into cloves.

Choose firm, dry-skinned and plump shallots; without signs of wrinkling or sprouting. Store in a dry, well-ventilated location for up to 3-4 months after harvest. We recommend storing them out of direct sunlight in a cool area. Refrigeration is not recommended as the cold temperature encourages them to re-sprout. Even if they sprout, you can still use them. Just remove the green sprouts unless you want a stronger flavour.

Minced shallots can be stored uncooked in oil in your refrigerator. Use high quality olive oil.

Shallots can also be peeled, chopped and frozen for up to three months. However, once thawed, they will have a much softer texture similar to that of lightly sautéed shallots.

A raw shallot is fairly hot, so we don’t recommend eating them raw. However, when they are cooked they loose their pungency and add a nice flavor. They make an excellent base for sauces. We recommend them in dishes to replace onions, and to add a little different flavor to an otherwise ordinary dish.

Shallots should be firm to the touch. Once cut they should be used quickly. The taste of shallots is sweeter and milder than most onions, sometimes with a hint of garlic which makes them particularly suitable for sauces, dressings and raw in salads. The are also excellent added whole to stews and casseroles and are ideal candidates for pickling.

Traditionally, shallots are a main ingredient in French cuisine. They are frequently used in
Chinese, Vietnamese and Indian cooking.

In general, if the recipe calls for one shallot, use all the cloves of the bulb. They cook quickly, retaining their silky texture and work very well in dishes using wine however although they caramelise like onions, it is important to sauté them very gently, as browning over high heat can make them bitter. They can be substituted by leeks or normal onions however the flavour will be much stronger.