Ricotta is regarded more as a milk product than a cheese. The paste has a granular structure and is white in color. Ricotta is made from the whey of ewe’s milk to which whole sheep’s milk is added, a practice rendered necessary by the heavy demand for ricotta. Sizes and weights vary. The flavor is savory and appealing.

The cheese is not aged. It must be consumed fresh or it acidifies. Ricotta should be eaten when it is fresh and it is extensively used in cooking, appearing in numerous dishes. 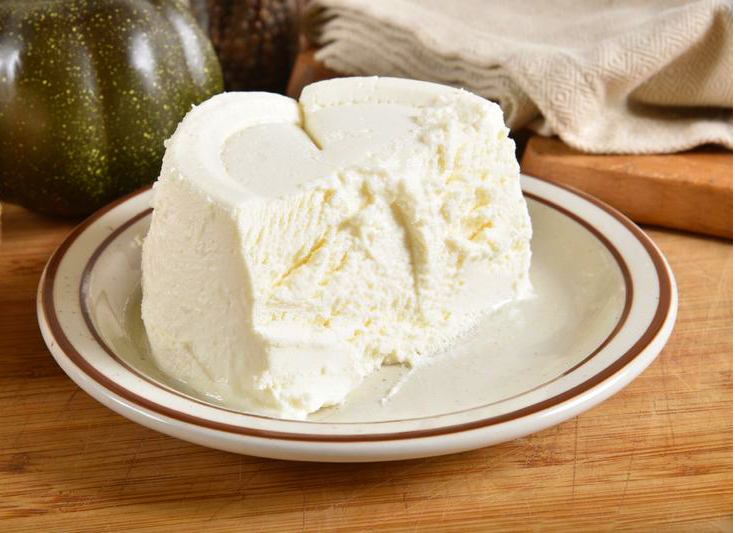 Fresh ricotta has 300 calories for each 100 grams (3½ oz.). Its protein content is relatively high and the cheese has a substantial percentage of fats that are formed into small droplets that are easily attacked by the gastric juices. As a result, the cheese is easily digested.

In technical terminology, ricotta refers to a byproduct of the cheese-making industry that is obtained by reheating the whey separated from the curds of sheep’s milk that are used in the production of pecorino cheese. The whey is brought to a temperature of 70-75 °C (158-167 °F.). The high temperature results in the coagulation of the albumin, a protein that the whey contains in abundance, and the globulin, the content of which is relatively meager. The curds rise to the surface and have a rather flaky appearance. The whey, which was originally turbid and greenish yellow in color, becomes virtually limpid. The curds are collected, placed in shallow conical baskets (fiscelle) and left to drain for 12 to 14 hours.

The cheese originated in the countryside around Rome. Production and consumption are quite ancient. The cheese was traditionally served to important guests and offered as a sacrifice at religious ceremonies. Ricotta Romana was probably invented in an effort to recuperate what would otherwise have been wasted.

The name ricotta is derived from the Latin word recocta, which means re-cooked or cooked twice. The ancient Romans made and consumed the cheese but it really became popular in the Middle Ages. Bartolomeo Sacchi, a 15th-century litterateur who resided at the papal court, has left a precise description of the cheese in which he also identified the origin of the name. “When the cheese is taken from the caldron,” he wrote, “the whey is heated so that any remaining fat will float to the surface. The country people call it ricotta because it is cooked twice to extract the cheese from the buttermilk. Ricotta is extremely white and has a rather pleasant flavor.”

Delicious things to do with ricotta

Ricotta can be kept for a short time in the refrigerator.

In cuisine, ricotta is the principal ingredient of a wide range of preparations, both savory and sweet. It is excellent when used in simple pastries in combination with a large variety of vegetables. It is also used in fillings for pastas, pizzas and focaccie. Combined with sugar, aromatized with cinnamon, coffee or chocolate and enriched with candied fruit and rum, the cheese makes an excellent cream for extremely delectable pastries traditional to the Latium region.