The nutmeg tree (Latin name Myristica Fragrans) is unusual in that it produces a fruit, the pericarp of which encloses two distinct spices: nutmeg from the seed itself and mace from the aril covering the seed. By the way, the “mace” used in crowd control and aerosols to deter would-be attackers is a chemical and has nothing to do with this plant. 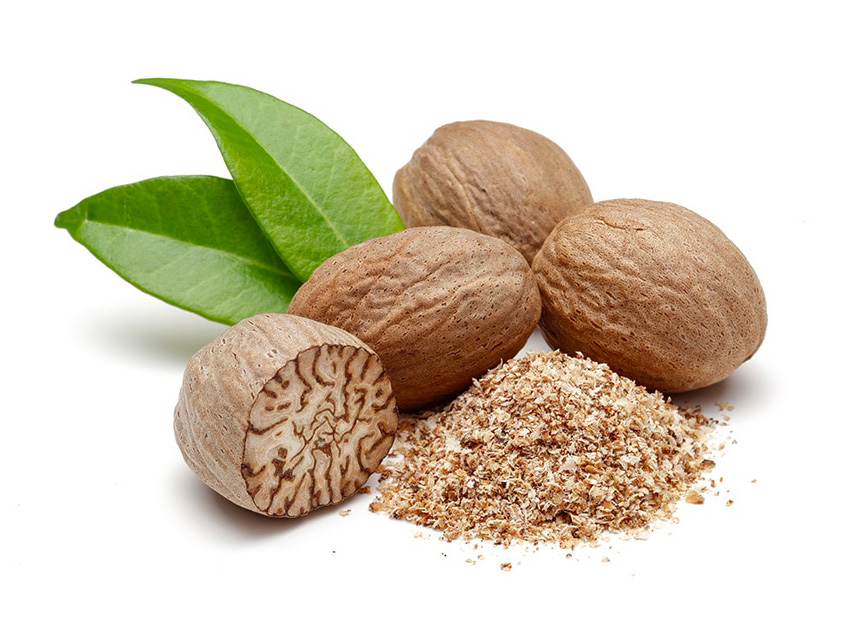 Their first specific place of origin was in the Banda Islands, Indonesia. Dutch explorers, in particular Van den Broeke and Jan Pieterscoon Coen took away the first batch of nutmegs from there in 1608. Their spread and popularity in Europe was meteoric.

So prized were these spices, that by 1621, Dutch military forces invaded and conquered the Banda Islands in order to gain physical control and have a monopoly over the production and trade of nutmeg and mace and consequently be able keep the prices extremely high in Europe. However the higher price paid was by the indigenous people of the islands, most of whom (some estimates say 90%) were killed or enslaved during the invasion.

Both spices were still extremely popular in England and throughout Europe in the 18th and 19th centuries. The English word nutmeg comes from the latin nux, meaning nut, and muscat, meaning musky. However, Nutmeg was also known to the ancient world. It has been found in Egyptian tombs and around the 13th century the Arabs began to trade it in the Middle East and Mediterranean.

The trees are currently cultivated principally in the Moluccas and the West Indies and elsewhere with varying success. These splendid evergreen “fruit” trees are big, reaching a height of about 65 feet (20 metres). They start bearing fruit 8 years after sowing, and continue to bear for 60 years or longer. When the fruit fully matures, it splits in two, exposing a crimson-coloured aril, the mace, surrounding a single brown seed, the nutmeg.

The remaining fruit are also dried gradually in the sun and turned twice daily over a period of six to eight weeks. Once dried, the shell is then broken and the nutmegs removed. These are greyish-brown ovals with furrowed surfaces and measure about 3cm/1¼ inches long with a diameter of 2.5cm/ 1 inch.

Mace and Nutmeg in cooking

The flavour of mace is similar to nutmeg, however it’s lighter and a little more delicate. Blades of mace are used for soups and sauces, and are often found in wine mulling mixtures. Powdered mace is a good addition in very small quantities to various sweet and savoury dishes such as pound cake, Swedish meatballs, stuffings, sweet potato pie, and it may surprise you to know that most American hot-dogs contain ground mace.

Store Ground or Blade mace in an air tight container as it quickly loses its flavour. If using blade mace, there is no need to grate it: just crush between your fingers and sprinkle it in.

Nutmeg has a more robust flavour and is also used in a variety of sweet and savoury recipes such as confections, puddings, meats, sausages, sauces, vegetables, and such beverages as eggnog. In England, it is an intrinsic addition to dairy desserts such as baked egg custard.

Whilst Ground Nutmeg is widely available and very convenient, it does lose its aromatic properties more quickly than “fresh” nutmeg. It is therefore preferable to obtain whole nutmegs and grate small amounts, using the smallest holes on the grater, as and when required, storing the remainder in an air tight container.

You can substitute each of them for each other in any recipe so don’t worry too much if a recipe calls for Mace but you only have Nutmeg. Bear in mind however, that you will probably need a little less nutmeg than mace.