Mint belongs to the Labiatae family Genus Mentha. Although there are hundreds of varieties of mint, Mentha spicata (spearmint, garden or common mint) is the most popular variety used in cooking, fresh or dried. It has an aromatic and fresh bouquet and is widely used in many European based and north African cuisines. Other types sometimes used for culinary purposes include Peppermint M. piperita, Pennyroyal M. pulegium, Orange Mint M. piperita citrata, Applemint M. sauveolens and Chocolate Mint (M x piperita ‘Chocolate’).

Mint has been used for both culinary and medicinal purposes for thousands of years and is even mentioned in the Bible. The name Mentha is derived from the Greek nymph Minthe. Greek legend tells how Hades (also known as Pluto) who was God of the underworld, took a shine to Minthe who soon became the unfortunate object of his wife’s anger. The jealous Persephone attacked Minthe turned her into a lowly plant and was in the process of trampling her to death when the broken hearted Hades took pity on her turned her into an aromatic herb so that when she was trodden upon, her sweet aroma would fill the air. 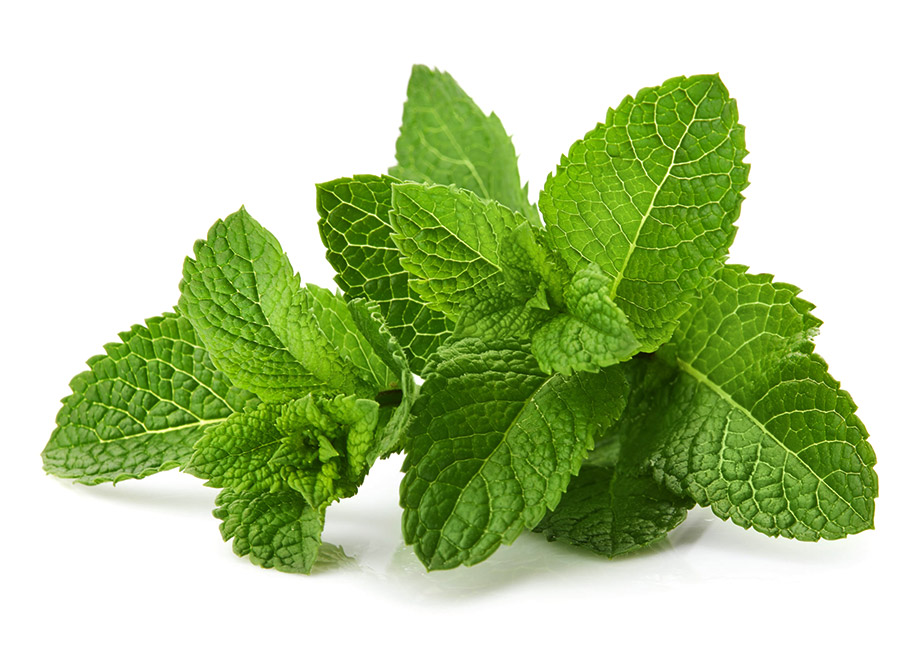 This theme runs through many civilizations: Peppermint oil has been distilled by the Japanese for centuries, ancient Hebrews scattered the floors of their synagogues with Mint and Ancient Romans are said to have rubbed their tables with the leaves before their guests arrived. It is also generally believed that the Romans are responsible for the creation of mint sauce.

Medicinally, the various mints have been used worldwide for centuries as a cure or relief for numerous ailments from flatulence and digestive complaints to fevers.

The mint plant is a perennial i.e. they keep coming back every year. Because mints hybridize both in the wild and under cultivation, it’s best to buy plants or seed from a reputable source. Propagation can also be achieved by division or by cuttings taken in the spring.

Generally they like semi-shaded positions and moist though not waterlogged soil. Peppermint and Spearmint can grow to up to 60cm/24 inches high but more usually 30cm/12 inches. Be warned that they are very invasive plants and spread like wildfire by means of underground stems so it is always wise to grow them within a container which can be buried in the earth.

Many recipes, in particular desserts and baked goods, call for Mint extract or oil. These are clear liquids which is made from fresh peppermint or spearmint leaves. Commercially, they are obtained via a steam distillation process where first the oil is extracted from the leaves and then it’s further processed by dissolving in an alcohol base to create the extract.

Dried mint is …well what it says – fresh mint leaves which have been dried, although there are two types; Freeze-dried and air-dried and their use differs slightly. Commercially freeze dried mint is first flash frozen then placed in a vacuum chamber where 98% of the moisture is removed by evaporation. It is then sealed in oxygen and moisture proof packaging. Dried herbs can be naturally sun dried or processed through dehydrators.

As mentioned above, Mint is available fresh, dried, as an extract and in the form of an oil. Most forms can usually be found in supermarkets.

When buying fresh mint, choose leaves that are rigid and evenly coloured with no sign of wilting. Place the mint, stems down, in a small container of water, place a plastic bag over the leaves and refrigerate for up to a week, changing the water every couple of days.

Store dried mint in airtight containers in a cool dark place. If you want to dry your home-grown mint, you can do so either by air-drying or oven drying but you should be aware that the high moisture content in the leaves makes them prime candidates for mould. When air drying, only hand small bunches, upside-down in a dark airy place for about 2 weeks. To oven dry – place individual leaves in a single layer on a baking tray sandwiched between kitchen paper then and place in a very cool oven overnight. When fully dried they should be very crisp and crumbly.

You can also freeze mint at home. Wash and dry individual leaves, place in a single layer on a tray, cover with clingfilm and freeze until solid. Transfer to small plastic bags or containers and return to the freezer where they’ll keep for several months.