A coffee percolator is a type of pot that brews coffee by pass hot water through ground coffee repeatedly. Percolators, once the most popular way to brew coffee, have given way to automated coffemakers in the last several decades. 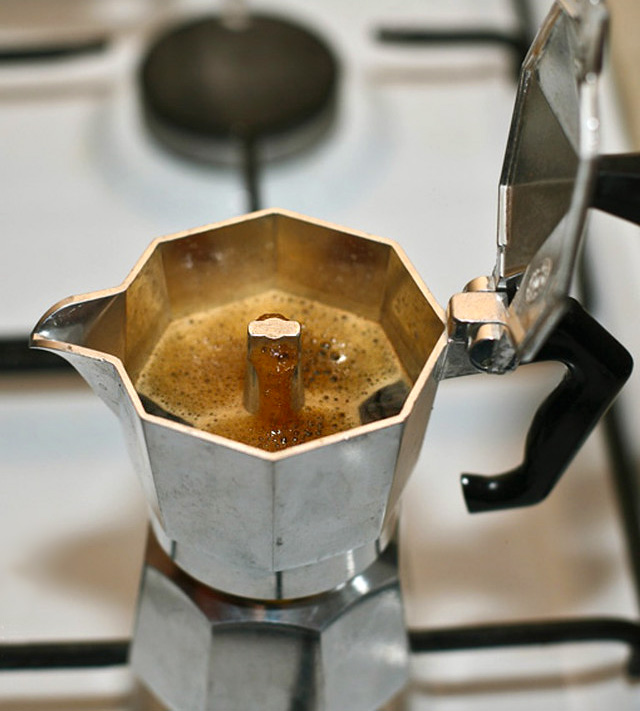 There are two basic types of percolator:

Since the 1970s, coffee percolators, which generally expose the grounds to higher temperatures than other brewing processes, have largely been replaced by automatic drip coffee makers.

Percolators have some drawbacks – the grounds are sometime exposed to higher temperatures than in other brewing processes, and may recirculate already brewed coffee through the beans – so that coffee brewed in a percolator may be subject to over-extraction. Also, percolation can remove some volatile compounds in the beans and lead to a less flavorful cup of coffee. But adherents say coffee is hotter and more robust through a percolator and that other problems can be avoided by controlling the brewing process.

The first type of percolator mentioned, a non-pressure driven one, uses a pot with a small chamber at the bottom, closest to the source of heat. A vertical tube leads from this chamber to the top of the percolator. A perforated chamber surrounds the upper end of this tube, just below it.

Water in the bottom chamber reaches a near-boiling point after being placed on a heat source such as a range or stove, or campfire. With most percolators, the bubbles force the liquid up the tube, although some models also have a one-way valve at the bottom of the tube to force water up the tube. The hot water is distributed through the perforated lid of the coffee chamber, seeping through the coffee grounds and dripping back into the pot’s lower chamber. Cooler water at the bottom is meanwhile forced up the tube, so the cycle repeats.

The coffee is ready for drinking when the temperature of the liquid reaches the boiling point and the characteristic “perking” sound the pot makes stops. Brewed coffee left on high heat for too long will taste bitter.

Coffee percolators with an integrated heating element automatically reduce the heat at the end of the brewing process and avoid overheating. Obviously these type of percolators should not be used on a stove.

Count Rumford, an American scientist and soldier, invented the percolating coffee pot while working with the Bavarian army. He disliked alcohol and tea and promoted the use of coffee because of its stimulating effects. In 1791, he was named a Count of the Holy Roman Empire and given the formal title of Reichsgraf von Rumford. 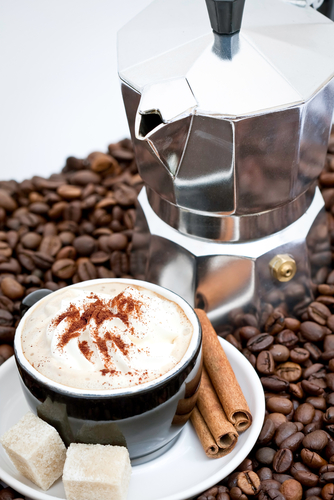 Campers and outdoorsmen often use percolators because electricity is not needed to brew coffee. Non-pressure percolators may also be used with paper filters.

Can a Moka pot, the stovetop espresso coffeemaker, be classified as a percolator? It is commonly referred to as a percolator. Certainly the process within the Moka pot of forcing the steam-pressurized water through coffee grounds can be considered a type of pressure driven percolation, and it has been referred to as ‘percolation” in patents.