Mozzarella di Bufala is a fresh cheese with a stringy consistency that is denominated as a typical product. This type of mozzarella is produced entirely from buffalo milk obtained from a single milking early in the morning. It has a globular shape and its weight varies from 300 to 600 grams (10½-21 ounces). 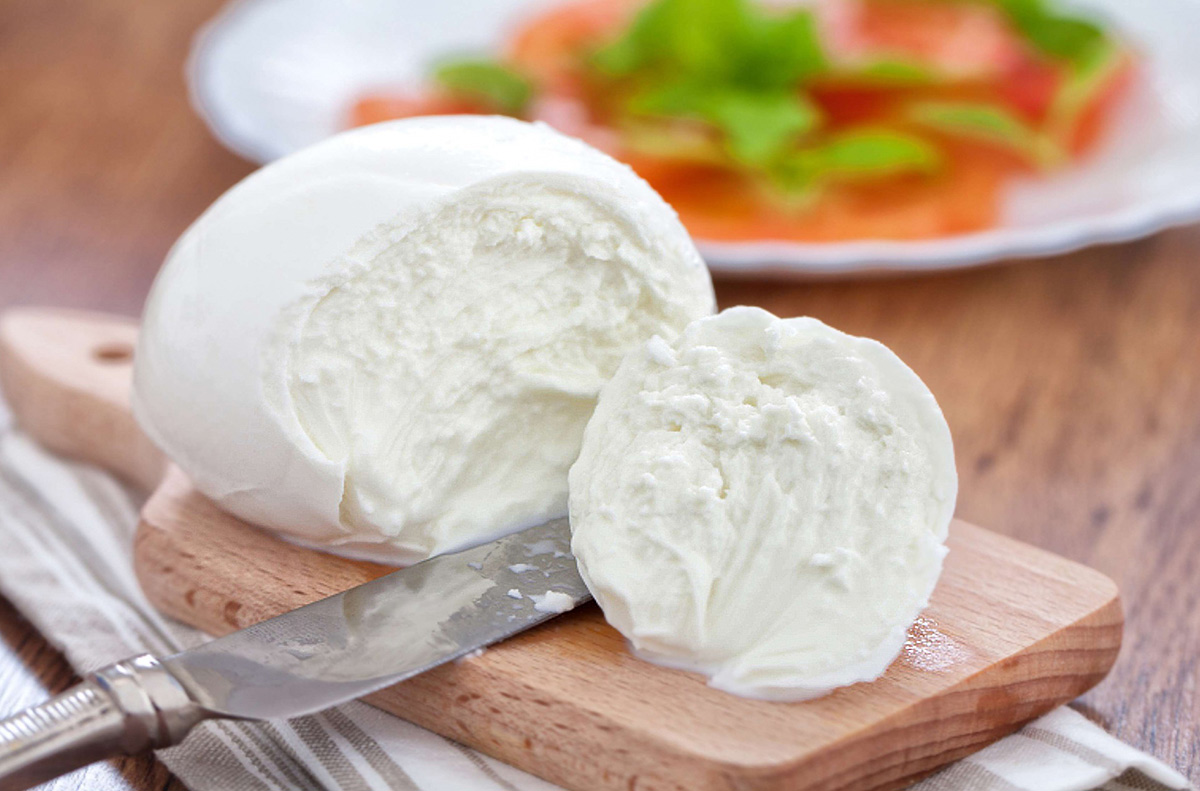 Buffalo Mozzarella is closely linked to the breeding of European buffalo, which until the beginning of the last century was practiced in many Italian regions. Mozzarella di bufala cheese is now primarily produced in Latium, Campania and Apulia.

Various hypotheses have been advanced to explain how and when buffalo were introduced into Italy. Among the most widely held is the opinion that the animal is either of native or at least Mediterranean origin, while there is another view that it was first brought to Italy by the barbarian leader Agilulph in the year 596. Whatever the correct explanation, it is a matter of fact that mozzarella di bufala cheese is not a recent arrival on the scene.

The paste consists of thin, overlapping sheets that tend to blend in the layers below the uppermost. The cheese has a porcelain white color, while the surface is smooth and bright and there is virtually no crust. It has a slightly elastic consistency in the first 10 hours after it has been packaged, then becomes more yielding.

Mozzarella is an extremely tasty table cheese and it is also extensively used in cooking, easily digested and has high dietetic values. The principal ingredient of numerous dishes, buffalo mozzarella is excellent grilled and delectable when breaded and fried. And it is an indispensable element of parmigiana di melanzane alla napoletana.

After being thoroughly checked, the milk is put into a caldron and brought to a temperature of 35 °C (95 °F.). The rennet is then added and the milk is allowed to “rest” for about an hour. At that point, the curds are broken up into small pieces, the whey is removed and the paste is allowed to rest for several hours or until a piece of curd, placed in boiling water, retains its shape. The curd is divided into large pieces, which are placed in containers and crumbled into small pieces and covered with boiling water. When the pieces rise to the surface, some of the water is eliminated and the paste is mixed until it becomes stringy. At that point, a worker takes a large piece of the curd and another worker tears off a smaller piece. It appears that mozzarella received its name precisely because of that operation of detaching or breaking off (mozzare) the cheese with the hands.

It should be kept immersed in the liquid with which it is packaged, in the lower part of the refrigerator.