As suggested by the name, blueberries are blue. The colour ranges from mid/dark blue through to very dark purple/black and the size ranges from small pea sized to large thumbnail sized. They belong to the family Ericaceae (Heather) which includes other edible plants such as cranberries, huckleberries and bilberries. Although there are several species of Vaccinium, the main commercially grown blueberry varieties are generally divided into two types – lowbush or wild V. angustifolium and highbush V. corymbosum. 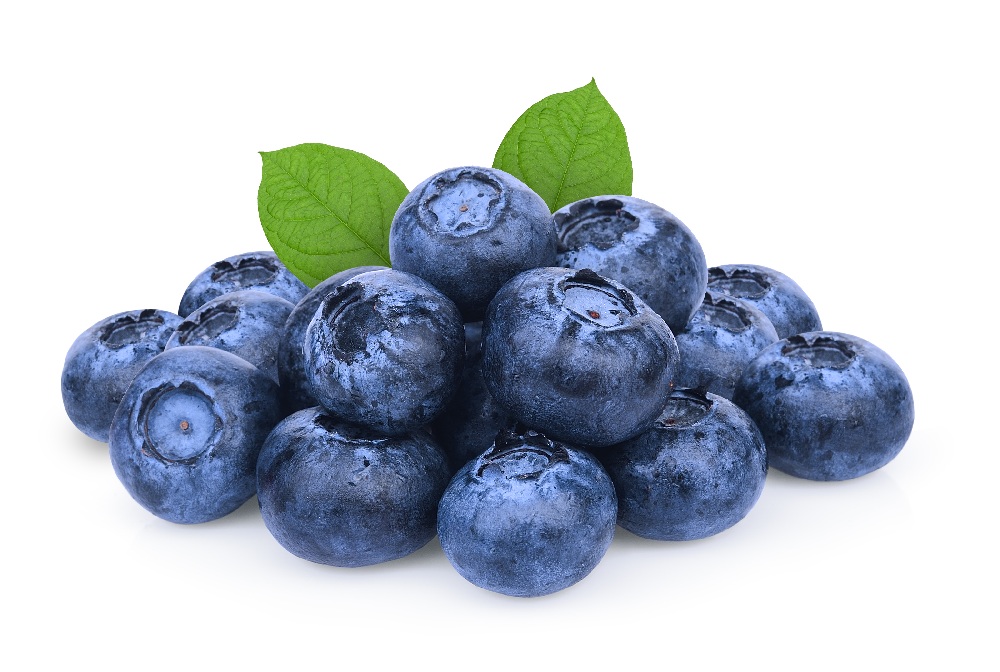 Blueberries have long been prized as a great tasting fruit. But did you know just how nutritious they are?

Blueberries were listed in Jean Carper’s Eat Smart column, as one of the top ten foods that will help you live longer. Here is the complete list:

Why are blueberries on this list? Well, according to Tufts University researchers, blueberries are one of the foods highest in antioxidants. They found that blueberries are so powerful in slowing the aging process in animals, that they can block brain changes leading to decline and even reverse failing memory. The human equivalent used in the animal studies is a half-cup of frozen or fresh blueberries a day.

The Vaccinium plant is thought to be one of the oldest plants on the planet and is native to North and South America, Asia, and Europe. Mention is made of them in European writings around the time of Virgil c.70 BC and Blaeberry jam was made in the court of James V of Scotland in 1513.

However, much more is known about the use of blueberries by the native Indians of North America who are known to have eaten them for centuries. They taught the pilgrims to use blueberries in numerous ways including drying then grinding them into a powder which was subsequently combined with cornmeal, honey and water to make a pudding called Sautauthig and as a spice rub to season meat – an excellent means of preservation for the lean winter months. These peoples held the wild blueberry in very high esteem and not only used it for culinary purposes but also medicinally as a relaxant during childbirth and as a tonic to purify the blood.

Blueberries are widely associated with The United States by most of us. Indeed, the US Department of Agriculture even designated July as National Blueberry Month back in 1999. Americans were the first to cultivate them for commercial use around the 1850’s with large scale commercial development of wild blueberry crops beginning in the late 1940’s and early 1950’s.

Today the United States produces over 110 tons of blueberries, the bulk of all blueberries commercially grown worldwide. Canada, Poland, and the Netherlands are also significant producers.

Cultivation. How to grow blueberries

The Low-bush blueberry V. angustifolium is a twiggy, deciduous shrub which only grows to 1-2 feet in height. Despite their dwarf status, each plant produces 1 to 2 pints of small intensely flavoured berries. In the wild, these plants spread via underground runners (rhizomes) and eventually create very large areas called “Blueberry barrens” which are suitable for commercial harvesting. They are very cold-hardy and can be found growing in climates as far north as Arctic North America.

The High-bush or Tall blueberry V. corymbosum can reach heights ranging from 5 to 15 feet although they are generally pruned back to around 6 feet to make harvesting easier and produce an abundance of large, sweet fruits.

Commercially grown blueberry bushes start to bear fruit within 12 months after planting and can continue to bear fruit for upwards of 30 years. They require long periods of cool weather during the winter to allow the flower buds to develop properly and as with many other of the Ericaceae family such as Rhododendrons, require a soil pH of 4.0 to 5.5.

Blueberries ripen from mid- to late summer. The “Bluecrop” season lasts a month however turning blue is not a sign of ripeness. Most Blueberries turn blue one to two weeks before they’re ready to pick and the berries don’t ripen all at once. Once the fruit have ripened they are harvested by hand due to the fact that they are easily damaged. However, with the invention of the blueberry rake, if they are to be further processed for jams etc., they can be harvested by machine. They must be fully ripe when harvested, as they do not continue to ripen after they have been picked.

Blueberries are available in many forms including tinned, dried, frozen and fresh.

Fresh blueberries are in their prime from late June through August. Select berries that are firm dry, plump, smooth skinned and completely blue, with no hint of red and check carefully for any mould or damaged berries. Blueberries are often coated with a light white coating called “bloom” which is not harmful and actually helps prevent deterioration. As water on the fruit accelerates deterioration, do not wash them until you are ready to use them. Store them in the refrigerator, unwashed, in a rigid container covered with clingfilm where they should last up to two weeks if they have been freshly-picked.

Blueberries are excellent for freezing as once thawed they are only slightly less bright and juicy as in their original harvest state. When freezing at home, do not wash them before freezing as this causes the skins to toughen. To freeze for eating in their raw state, place them in a rigid covered container and cover with a syrup made from 4 parts water and 3 parts sugar then freeze. To freeze for future cooking, place the berries in a rigid covered container with one inch of head space for expansion. Rinse after thawing and before eating. Crushed or pureed blueberries should be frozen with the addition of approx 200g/7oz sugar to each 450g/1lb of fruit. Frozen blueberries will keep for a year.

Dried berries are also available and should be stored similar to raisins i.e. in a cool, air-tight container.

Generally speaking, you can use these in any way that you might use blackcurrants or cranberries. They lend themselves for use with spices such as cinnamon, coriander, cardamom, nutmeg and ginger. and combine well with other fruit such as apples, pears and other berries as well as savoury items such as cheese, poultry and meats.

Blueberries sometimes change colour when cooked in certain recipes especially ones containing acids such as lemon juice and vinegar which cause them to turn reddish or in an alkaline environment, such as cake mixtures with too much bakingsoda which sometimes make the berries take on a greenish tinge. To reduce colour streaking, stir blueberries (unthawed, if frozen) into the mixture as late as possible before cooking. However, as a general rule, blueberries will not bleed their colour unless the skin has been broken. Remember, when substituting frozen blueberries in recipes, the cooking time may have to be increased slightly to be sure the berries are heated through.